Comparison between iPhone and Android - Agicent 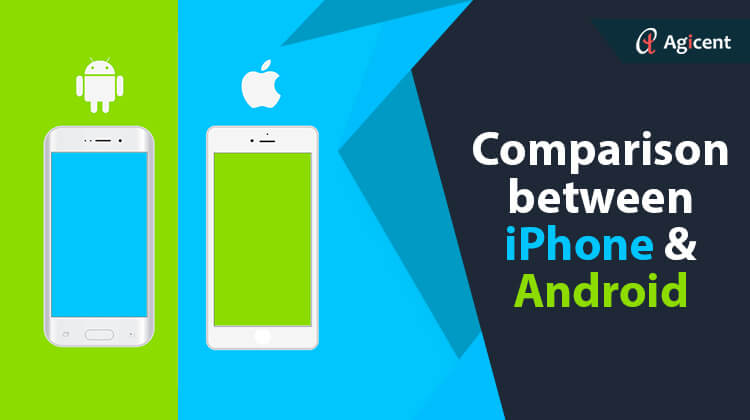 It would seem like a clash of the titans if you compare iPhone and Android. Yet, there are subtle differences between the two if you wanted to compare the two and opt for any. One of the foremost differences where iPhone scores is the fingerprint technology while the Android has less secure face recognition system or bypassing of lock screen.

While favorite feature is better in Android, there is no denial that Facetime makes iPhone a superb phone. On the part of a camera, there are many competitors to the Apple phone. However, the camera quality is anyday extraordinary in an iPhone. But, Apple falls flat with its iCloud platform while Android is better when it comes to storing pictures. Even on the front of applications, the Android does score better marks than the iPhone because it is far superior if you wish to organise your apps.

Apple has an upper hand in the notifications received as users can reply to it without opening them necessarily. Another department where iPhone has an edge is the in-built flashlight that makes it convenient for usage in an emergency. However, it has to be downloaded for Android. Although iPhone does have an upper edge in a number of things, the sheer variety of phones which are compatible with Android platform as well as extraordinary features developed by Google such as Maps and searches is actually commendable.

However, if you are an iOs development agency, then it is definitely a positive aspect that more and more users are turning to Apple’s iPhone because of its pure class and style. Companies understand this aspect and should look at taking iOs programmers for hire in order to sell their apps over the popular gadget.

Firms such as Agicent Technologies have a dedicated team for apps on iOs. Companies should look at taking help of professional services in order to stay ahead of the curve.