Just to start with, I believe all three terms sound quite familiar now when it comes to web development. This is the most prevailing question in the minds of people with any idea into this business that which framework should be used for the best possible results. To be clear, let me just tell you that all of these are front-end technologies used for web application framework. They are all open source technologies based on JavaScript which is one of the most efficient programming languages known. Many business individuals such as those dealing with such projects of web development or SME’s which includes web development services as a part of their work opt for atleast one of these frameworks. Out of these three, Angular.JS is the first one to transpire, the second is React.JS and the one that is introduced most recently is Vue.JS. All three hold a tough competition in terms of features and functions which make it very difficult and confusing for people to select one out of them. So, to analyse them better and to go for one which would of course be a wise decision for your business as every step plays a crucial role in success or failure. To ease the efforts of our readers, I have been through some facts and reports and have concluded them in the form of this article. Without much delay, lets now discuss all of them comparatively to get an exact idea of which JS technology will be the most suitable one for your project.

Lets start with a discussion to figure out Angular.JS Vs React.JS Vs Vue.JS. We will delve into the pros and cons for each of these frameworks.

Which Framework to Choose for Web Development in 2018? 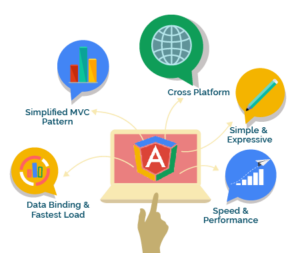 As you can get an idea of points included from the image above, lets discuss them more in detail.Angular was the first framework introduced in the world of web development in 2010. Since then, the synchronization of data have  made it easy between the model  view and the components. Angular5 is the latest version that is used widely. It was launched by Google and have an external community for support. It also has an extended HTML library for further assistance. One significant feature includes MVVM(Model-View-ViewModel) architecture – that allows the developers to work on the same set of data separately on a different app section. To understand further, let me just list down some pros and cons for Angular.JS –

It is also a open JavaScript library that was released in 2013. It is maintained by Facebook and additionally by a community of individual developers and companies. It can be used as a base in the development of single-page (SPA) as well as for mobile applications. It lets you alter the data on a regular basis. React Native, a different version was also announced in 2015 that prevented HTML5 to be used the way it was being used and enhanced the use of JavaScript.

Now to note some pros and cons for React.JS which are listed as:

This is the latest of all and was launched in 2013. With advancement, it offers sophisticated and modern single-page applications. It is gaining popularity because of its scalability and also the easy coding that it provides. Though it is less used compared to the other two, but still lets discuss the pros and cons it offers:

To get it all together for a better comparison, lets have a look at the below tabulated form :

So from the table above, you can easily evaluate all the three frameworks and thus can easily select one out of the choices. Now to justify our question which was Angular.JS  Vs React.JS Vs Vue.JS-Which one to chose for web development in 2018? it can be said that if you are well versed with JavaScript and HTML and also if there is no compatibility issue of the browser you are using, you should definitely go with Angular.JS, because it offers features like MVVP and also possess dependency projection.

If your development team is searching for a framework that offers the best possible learning curve, then the option is obviously Vue.JS. However, React.JS uses minimum abstractions but it takes longer time to acquire the best practices. Angular.JS on the other hand comprises of a huge library and needs mastery in acquiring knowledge on MVC, typescript etc.

On the other hand, if you possess a deep knowledge of both JavaScript and HTML and you are confident about working with it, then only you should select React.JS because it offer a little poor documentation – which makes it difficult for a new user to understand. But the syntax is simple so if you can handle the coding complexity, React.JS would be the best choice.

Moreover, if scalability is the issue with the developers then Vue is not at all a good choice, as it lacks in best scaling practices – thereby generating spaghetti code. It is Angular that offers an easy-to-scale option, as it comes with a powerful Command Line Interface (CLI). React tends to be a better choice – compared to Vue.

Furthermore,  if we talk about the most latest of all i.e., Vue.JS, you can go for it if you are new to this field and have less prior experience because it offers a very detailed and simple documentation to understand. Also, it is the fastest of all so if you want quick results then you should definitely choose Vue.JS.

Finally, as mobiles are gaining popularity all over the world, Angular has higher loading time and causes performance related issues on mobiles. Vue can be easily set up and requires no changes or syntax. It is this quality that has endeared Vue among the developers.

With this we may conclude the post. I hope we were successful in solving your queries and questions regarding the topic and now it might be easy for you to make the right choice. So, next time when you get any plan of web development, just go through our post where we have listed all the pros and cons and with a comparative guide, we made it quite simpler and precise for our readers.

If you feel like you have any other valid point that should be included here, you may feel free to reach out to us at [email protected]. And in case of any queries and doubts feel free to discuss in the comment section below. For more of such useful topics and post, stay tuned with our blog. Keep Reading!