How to validate an app idea, and launch! - Agicent 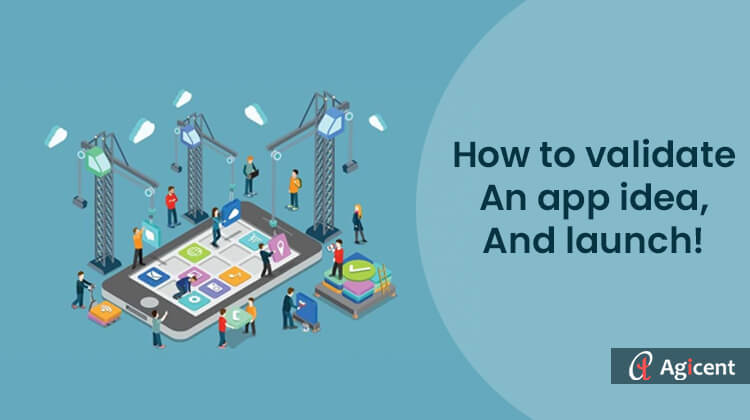 Validating an app idea is the first step you should be doing at your end before hiring a mobile app development company or developing the app yourself. There is a well-known fact that 99% of the ideas that get generated by a human mind are not unique. The same follows with app development process so if you come up with a brilliant idea then just don’t get it blindly developed and first learn how to validate an app idea and perform simple tricks that we’re going to discuss in this post. You need to figure out that whether your app idea provides any added value to your target audience or is it really worthy to be developed? Thinking of these consequences can prevent a huge or subtle business risk in the end.

Let’s now discuss about different methods that you can use to validate your app idea.

The important thing to note here is that people with whom you are interacting can be the future users of your app. So, collect as much information about the app idea from as many people as you can. This will give you an insight of the idea and how people might react to your developed app.

In your quest to get your app idea validated directly by potential customers, you can also leverage the power of the Internet. You can use online surveys and social media polls to get thousands of user reviews in no time and then take a look at these user reviews to evaluate your app idea.

To conduct online surveys, you can use Google Forms or any other similar tool to create a basic set of questionnaires that you want to ask people regarding your app idea. After that, share the created user feedback form with your target audience. People will then fill out the form and submit it back. You can then read their answers to know how they feel about your app idea.

For social media polls, you can use Facebook and Twitter. Both of these social media platforms let you create polls which you can share within your circle and ask people to vote. Based on the number of votes on each option, you can assess your mobile app idea.

Interestingly, there are many online tools like Viima and IdeaSquare which you can help you to assess your app idea. You can share and discuss your app ideas with other users on these portals. However, make sure that you get a patent for your app idea before sharing it online as it can also be very easily stolen by others.

Once you have noted all the reviews from previous methods, you will surely get a better understanding that whether your app idea is viable or not and even if the idea is feasible then will people be reluctant to get on your platform or feel encouraged?

Now, here comes the next step i.e. Competitive Analysis. With over 3 million apps in the Google Play Store and 2 million apps in Apple’s App Store possibility resides that the app idea you are coming up has been already implemented. A simple Google search or Play Store and App Store search can show you the related apps that share the same idea as you have already thought. If you find some low-quality apps then it is a green signal to go and start the app development process. Conversely, if there are many apps sharing the same idea then there are 2 things that can be done:

In competitive analysis, you have to see how well the existing apps are performing, from where they are getting funding, and most importantly identify their missing features (call it gap areas). See if you can add those missing functionalities to your app idea as it will make yours stand apart from your competitors and grab eyeballs of potential customers.

After successful analysis of your competitors, you can step into Market Analysis. Having a validated app idea at this stage will help you to analyze the current market in terms of market size, demographics, previous trends etc and you can better create a launch strategy and overall marketing plan.

MVP stands for Minimum Viable Product where you launch a product in the market with limited set of but “most compelling” features, and then notice user’s behavior with the same. If they liked the product idea, you can then launch another set of attributes and finally end up presenting a full-fledged product to your audience over a period of time.

If you have already planned to get an MVP app for your app idea then you can hire our team of experienced Android developers and iOS developers to get the job done. Not just this, we will also help you in validating your app idea, analyzing its market scope, along with all the App design & Development services.

This is also an important aspect of validating a mobile app idea as you just can’t expect an investor knocking on your door the next day you launch your app. Yes, it can be true but chances are quite rare as in most cases, you need to show results to investors in order to convince them to make a funding. Thinking of worst case scenarios, you need to ask yourself a question “how long can I make the app sustain without a funding?” If you can answer it then go ahead and start the execution plan otherwise you need to pick an appropriate revenue model for your app idea so as to keep it running until and unless you get an offer from an investor.

Many of our clients who are first time into app development ain’t readily well versed with app monetization techniques, so we at Agicent App Development Company help them understand the pros and cons of each app monetization strategies and help them choose between freemium, subscription based, and other revenue plans as per their best-fit.

So readers, these were some of the methodologies that you can use to get your app idea validated. If you are still confused then feel free to contact us. We will guide you through the whole process with our app development experience of over 8 years and give you an affordable app price quote to turn your app idea into reality.